Is Evolution a Good Answer? 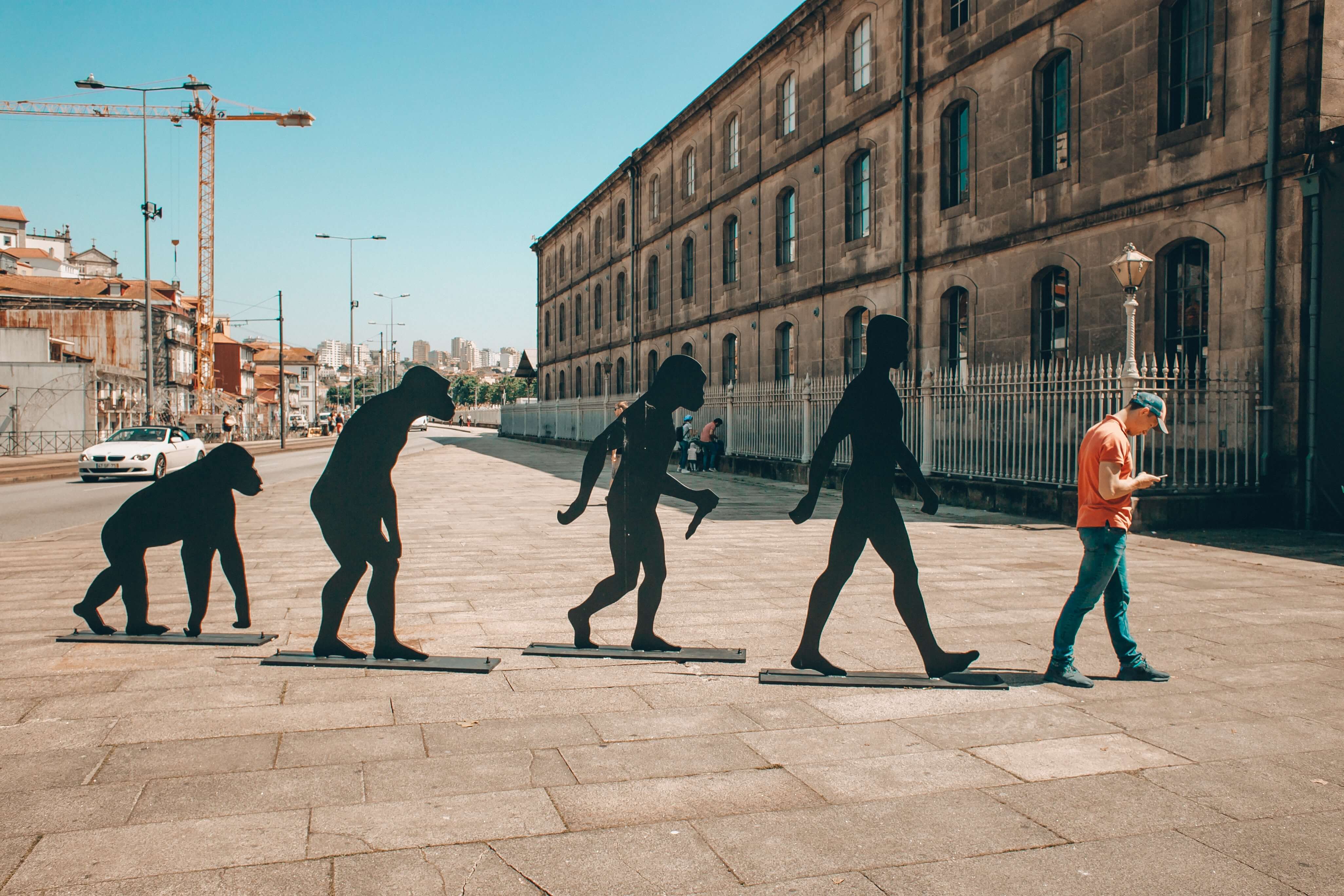 I was watching the latest season of Billions, a TV show about an alpha hedge fund analyst, Axe, whose office environment feels like Darwin’s case study on “survival of the fittest.” But in contrast to his Darwinian office vibe, in Season 5 Episode 3, Axe gives a speech to an auditorium of prep school students in which he rejects the implication that evolution played any role in his success: “nature didn’t select me,” he says, “I selected myself by harnessing my nature.”

Later in that same episode, his performance coach/in-house psychologist, Wendy, explains to a struggling analyst that all you need to know about people revolves around “‘convictions running headlong into layers of psychological baggage.’ This perspective… encompasses both those tricky forces of ‘evolution and social convention.’” Here, in contrast to the protagonist, Wendy is suggesting that evolution is critical to understanding people and their success.

Wendy is embracing evolutionary justifications, while Axe is rejecting them. Who is correct? Do we defy evolution on a daily basis, or is it the underpinning of all of our actions? And what are the implications of explaining some behavior as a product of evolution rather than our own choices?

What are evolutionary justifications?

Evolutionary justifications occur any time someone tries to explain the behavior of an individual with a perceived inherent characteristic of Homo sapiens or of their subgroup of Homo sapiens, e.g. all males. These characteristics were once matched to an evolutionary environment. Typically, however, these environments for which those characteristics evolved no longer exist, and we call this phenomenon evolutionary mismatch. For example, humans evolved to be capable of regular endurance running for the purposes of catching food, but very few of us today need to run regular half-marathons in order to feed ourselves.

What she is referring to is the popular evolutionary theory that because men participated in linear tasks such as hunting, which required singular focus, they evolved to be less good at multitasking compared to women, who stayed at the campsite juggling child care, cooking, and social welfare, amongst other things. My mom holds this evolutionary mismatch accountable for her husband’s occasionally poor ability to process that she was speaking to him when his mind was focused on something unrelated, much to everyone’s amusement.

When evolutionary justifications can be helpful

Having an understanding for our evolutionary environment--including evolutionary mismatch--can add powerful context for how we live healthy and well-adjusted lives. For example, you may have seen a number of evolutionary discussions arise in the debates about school opening times. Studies suggest that your teenager isn’t actually being lazy or disobedient when they choose to stay up till the wee hours of the morning and then sleep till the afternoon. In reality, there was a great safety benefit that could be gained when adults of different age groups had differing natural sleep cycles: the elderly would sleep and wake up earliest, middle-aged adults would sleep at “typical” times, and young adults would sleep latest. This distribution of schedules ensured that at least some member of the group was likely to be awake at any point during the night, and that person could sound the alarm in the event of an emergency--like that of a lion entering camp.

While we may not be afraid of lions creeping into our campsites on a daily basis anymore, this evolutionary justification does explain why asking teenagers to arrive at school by 7am is a particularly cruel punishment: we are asking them to completely reject their naturally evolved sleep cycles. Having this additional information could inform the acceptance of different school schedules which are more sensitive to the natural rhythms of students at this age.

Similarly helpful has been the evolutionary context for sitting versus standing. You can’t have missed the recent craze for standing desks and even treadmill desks. But did you know that there were studies supporting the health benefit of these desks based upon evolutionary characteristics of the human body? Turns out, sitting is so bad for you because humans didn’t evolve to sit for twelve hours a day -- go figure. Having this context helps us make healthier choices for our bodies, too.

Evolutionary justifications can even be as effective as to improve your relationship with your dog. Dogs didn’t co-evolve with humans to be the petted and pampered members of our family that we treat them as today. That doesn’t mean we shouldn’t shower Mr. Fluffy with all our love; but it does mean having context for our evolutionary relationship might help us communicate a bit better.

When evolutionary justifications can be toxic

One of the most pervasive and problematic evolutionary justifications you will have certainly heard but may not have necessarily thought about it in an evolutionary context is the phrase “boys will be boys.” This phrase has come under significant criticism in the past few years and there have been many eloquent explanations as to why it is so problematic, which I won’t repeat here. But I encourage you to consider how the phrase uses the same framing as evolutionary justification to suggest that there is something inherent to human behavior--in this case, specifically male behavior--that is immutable and predictable, and therefore, excusable. It is a significantly more toxic cousin of “See buffalo, shoot buffalo,” in which a person’s behavior is brushed off as a product of their evolutionary inheritance, rather than their choices.

Another powerful and all-too-familiar example are evolutionary justifications for women staying at home to care for children. We have all seen the written explanations that a woman’s bond with her child is “just different,” and no child should be deprived of that bond. Evolutionary biology does not deny the critical role that pair bonds appear to have played in many aspects of human evolution and traditional societies. But it would certainly deny that all pair bonds in all societies look the same, and that the demonstration of these pair bonds haven’t changed overtime. Presenting women’s relationship with their children as something that has been unchanged throughout human history to the point that a woman choosing to work is denying millions of years of natural selection is nonsensical.

These examples often suffer from a reductionist approach to evolution, in which individuals latch onto an evolutionary example that appears to support their claim and ignore all the context and complexities that surround any evolved human trait. More importantly, however, they fail to recognize that any evolved behavior or tendency is still subject to the influence of our environment and, most importantly, to our individual choices.

So who was right, Axe or Wendy? Are we solely responsible for our actions, like Axe believed when he excused himself from evolution and took full ownership for his success? Or can all human behavior be explained through evolution and social pressures, and so our only hope is to keep providing evolutionary justifications in order to understand anything?

Unfortunately, it’s a little bit of both. Evolutionary justifications are a tool to understand ourselves and each other, and like Wendy said, having that evolutionary context can be helpful in navigating the world. But like all tools, it can be destructive. When Axe removed himself from evolutionary forces (rightly or wrongly) he took full ownership for his actions; and ultimately, that is what every person must do.

Evolution only provides us with trends and probabilities. Based on your evolutionary context, you are likely to respond a certain way, to find fulfillment in certain things, or to enjoy certain social rituals. But none of these behaviors are guaranteed, and none of them are free from the influence of culture and circumstance. If we take for granted the premise of Free Will, then no evolutionary justification can be a full explanation of behavior.

Evolutionary justifications can be a data point, but they can’t be an excuse.

Provide evolutionary justifications to help make sense of the world around you, but never forget that they can’t tell the whole story. Nor do we totally want them to. Just because I enjoyed reading Why We Love doesn’t mean I want to tell my partner that I believe our affection is entirely composed of hormones and an evolved craving for secure pair bonding in order to procreate.

There are some mysteries of human behavior that are best left with some room away from evolutionary justification--that room gives us space to be both responsible for our actions and slightly distanced from our nature. Which is ultimately what enables our species to be everything we believe it to be.